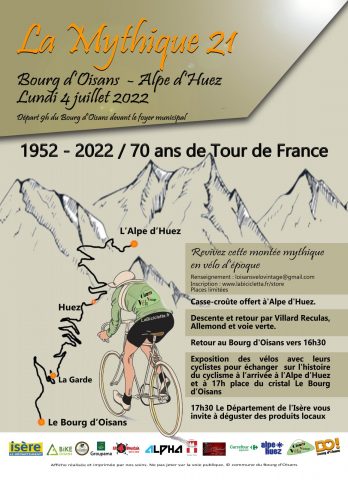 For the 70th anniversary of the first climb of Alpe d'Huez on July 4, 1952, during which Fausto Coppi won the stage, a hundred amateur cyclist in vintage outfits from the 50s to the 80s!

To follow them, the famous Peugeot 203 “Tour de France”! A vintage gem! In 1954, the newspapers l'Equipe and Le Parisien Libéré placed an order with Peugeot for twelve 203 specials to follow the Tour de France. The main feature of this 4-seat roadster is the absence of doors. They were made on the basis of the 203 convertible, known for its solidity and maneuverability. It is a car model that has become very rare today because only sixteen copies were made. Its first appearance was in the 1954 Tour and it was used until 1965, later replaced by the 404 Tour de France. The original color is off-white and has a black plastic hood. With a 4-cylinder in-line engine, it had a top speed of 120 km/h.

The route: starts from the center of Bourg d'Oisans towards the Pont de La Paute, then the group takes the green road before starting their "grouped" ascent. At 200 meters from the official finish, the cyclists can let off steam with a final sprint!

The podium and presentation of the yellow jersey will be dedicated to Alpe d'Huez, followed by an exhibition of their bikes around a snack and exchange with tourists. Then it will be time for the descent via Huez - Le Pas de la Confession - Villard Reculas - Allemond where the return to Bourg-d'Oisans will be via the Voie Verte with around 4.30 pm / 5 pm exhibition of their bikes.